A collaboration between several centers and departments of Université Laval and the Natural History Museum of London suggests new avenues to better understand the key role of viruses in Arctic ecosystems. The method used also demonstrates that samples recovered more than 100 years ago can provide new answers using modern genomic tools.

The interdisciplinary collaborations initiated in this project were made possible, in part, by Sentinel North's research program.

As we continue to manage the ongoing pandemic, the role that viruses play has never been more relevant. They are present and attack pretty much every single living organism, from the biggest whale to the smallest bacteria, including a type of blue-green algae known as cyanobacteria.

By studying the genomes of Nostoc cyanobacteria that live in the extreme polar regions, scientists hope to understand not only how they manage to survive, but also the role that viruses play in the ecology of these environments. To answer these questions the research team including, Dr Anne D. Jungblut, a microbial researcher at the Natural History Museum, along with her colleagues at Université Laval, Quebec City, Canada, turned to historic cyanobacteria samples housed at London’s Natural History Museum that were collected during the British Arctic Expedition, which took place between 1875 and 1876.

The team peered into the DNA of Arctic cyanobacteria looking for evidence of viruses left behind in their genomes. They also looked for compounds known as secondary metabolites which help the microorganisms survive the extreme conditions and are of great interest in the development of new medicinal drugs.

Dr Jungblut says, 'This is the first time that anyone has looked in detail at this viral interaction in Arctic cyanobacteria. It highlights how viruses are an integral part of the microbial ecology and the ecology of polar ecosystems.’

'One of our analyses also found a high number of secondary metabolites. These are of interest because they are often bioactive, and some people screen for them for use in developing new medicinal drugs.'

Despite being collected over 100 years ago, the team were able to extract DNA from the cyanobacteria samples and then compare it to modern samples to see if there had been any notable changes in the organisms over time.

The samples studied were picked up by the British Arctic Expedition, which set sail from Portsmouth in 1875 in a bid to reach the North Pole. Led by Captain George Strong Nares, the expedition travelled up the east coast of the Canadian Arctic islands, where it got trapped in the ice.

'It was one of those failed expeditions where they got scurvy and were stuck north of Ellesmere Island,' says Anne. 'They were trapped for the winter but made lots of scientific observations and collections of biological samples and did make it all the way back.'

By looking into what is effectively the immune system of the cyanobacteria, they were able to see that the viruses that were attacking the microorganisms back in 1876 were completely different to those which are targeting the modern ones.

'This is the first time that anyone has looked in detail at this viral interaction,' explains Dr Jungblut. 'We originally had hoped to find the same viruses as those that infect modern cyanobacteria, but we didn't.

'That is not too surprising though, because viruses have a high turnover and they change a lot as we see with the emergence of new COVID-19 variants.'

They were also able to show that polar and temperate cyanobacteria had genes that help them to respond to extreme conditions. While there were no obvious genetic traits that were specific for polar Nostoc cyanobacteria, they did have higher concentrations of some secondary metabolites. These could be of interest in the future to researchers who are developing new drugs.

The work helps to highlight the key role that viruses play in the polar ecosystems, as well as the value of samples collected hundreds of years ago in natural history museum collections, and which can now be studied in even more detail using genomic tools.

The study Genomic diversity and CRISPR‐Cas systems in the cyanobacterium Nostoc in the High Arctic is published in the Environmental Microbiology. 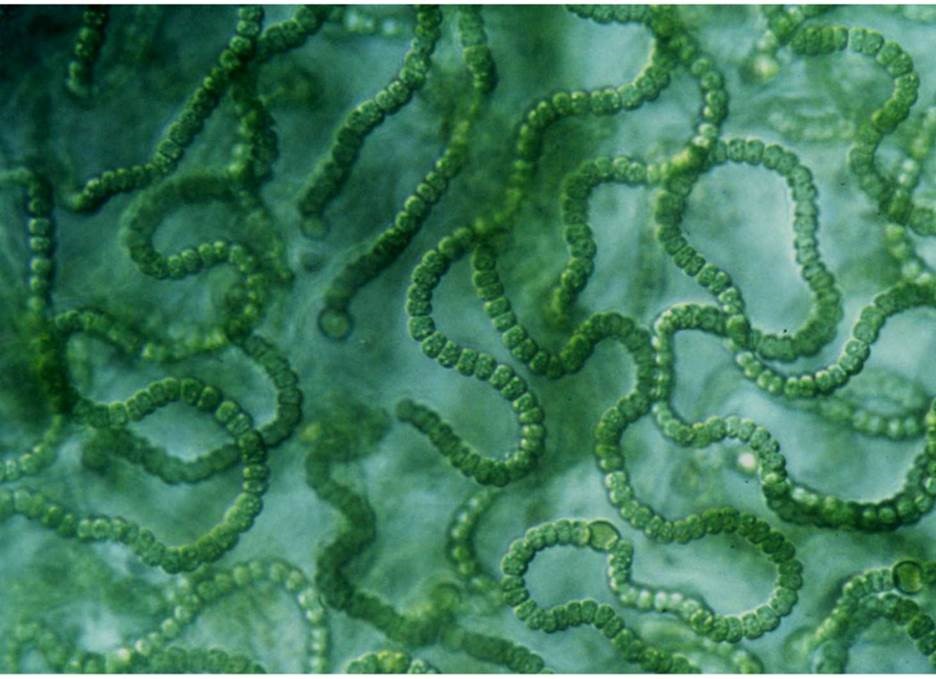 Nostoc cyanobacteria, a type of blue-green algae that are primary producers in the Arctic. Photo: W. Vincent.

Professor Anne Jungblut has been comparing samples of cyanobacteria collected over a hundred years ago with modern samples like the one she is holding.