Addressing the complex issues brought on by accelerating climate change and socio-economic development in the North requires a research approach that transcends traditional disciplinary boundaries. The convergence of expertise in the engineering, natural, social and health sciences can foster the kind of innovation and multifaceted knowledge needed to gain a holistic perspective on how climate change impacts are cascading through social-ecological systems and to develop adaptation strategies [1]. There is now growing evidence that interdisciplinarity yields higher research impacts [2, 3].

Launched in 2017, the Sentinel North (SN) research program at Université Laval (ULaval) promotes transformative research through interdisciplinary projects that aim to improve our understanding of the northern environment and its impact on humans and their health. As part of the initial phase of a case study into the impacts of interdisciplinary research, SN’s achievement in mobilizing ULaval’s diverse research community and lowering barriers between disciplines was assessed.

While measuring interdisciplinarity can offer insight into knowledge flow between disciplines, it nevertheless remains challenging in part due to the difficulty of quantifying the various dimensions associated with disciplinary integration [4, 5]. A collaboration between SN and Science-Metrix seeks to capture the multidimensional construct of SN’s interdisciplinarity through the development of a new visualization approach.

Using the network of co-citations of each of SN’s published papers, a bibliometric indicator of interdisciplinary integration was first calculated [3]. The cited references in a given paper are generally assumed to reflect the knowledge that is being integrated in the original research [6, 7]. The indicator considers the 3 key dimensions of interdisciplinary: 1) variety - the number of different disciplinary subfields that are being cited in a given paper, 2) disparity - the intellectual distance of those subfields between one another, and 3) evenness - the distribution of the co-citations across the cited subfields. Secondly, using a slight redefinition of the interdisciplinary indicator, a novel chord diagram approach was used to visualize SN’s interdisciplinarity according to the same 3 dimensions. 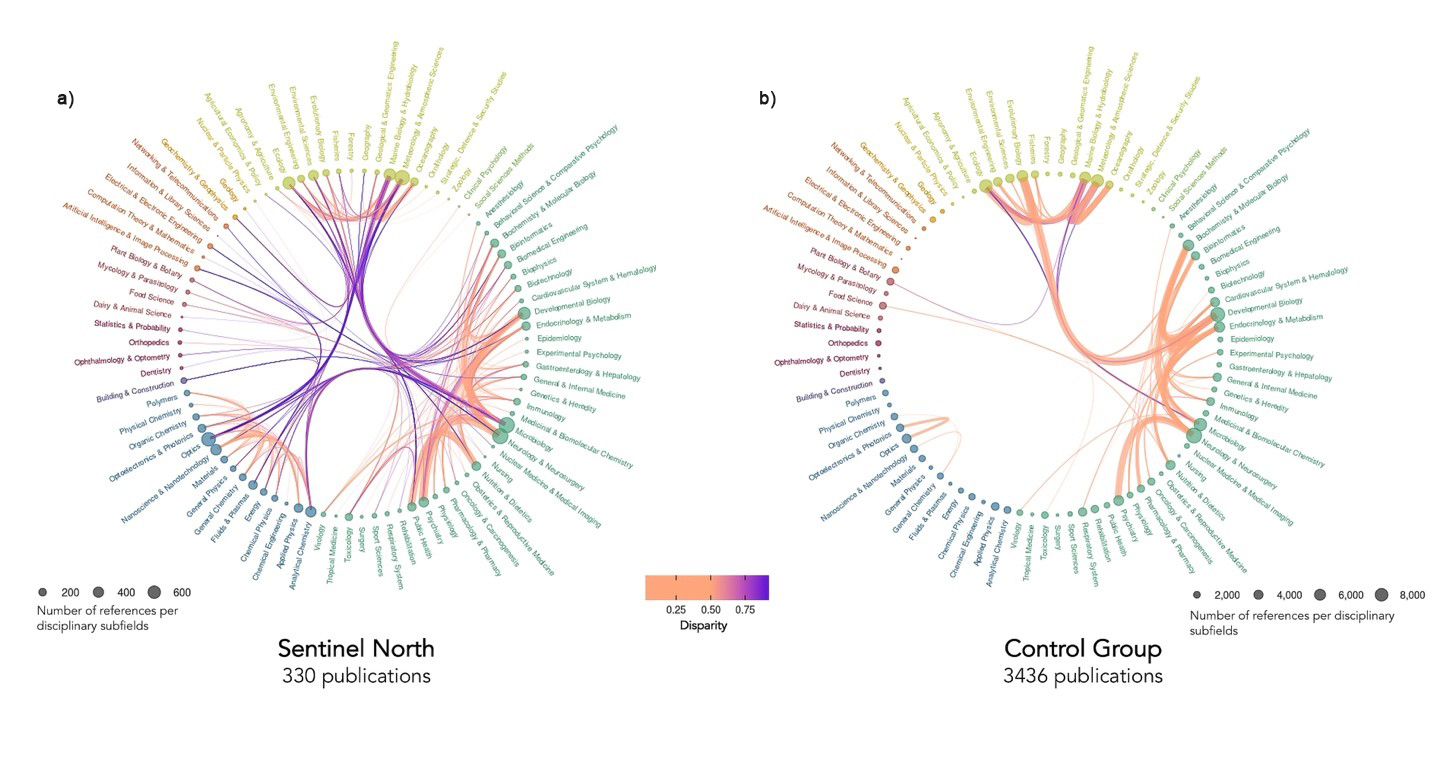 Figure 1 (click to enlarge): Chord diagrams showing co-citation links between disciplinary subfields for papers originating from: a) SN program, and b) control group - research initiatives other than SN. Disciplinary subfields displayed along the circular axis are based on Science-Metrix’s classification.

The chord diagram results clearly demonstrate SN’s achievement in fostering interdisciplinarity at ULaval. The relative number of disciplinary subfields cited in the set of SN papers (i.e., the variety dimension visualized as the number of links) is 2 times higher than in the control set. Disparity between subfields, as indicated by the color of the co-citation links with orange-pink capturing low disparity and blue-violet high disparity, is also much higher in SN papers. High disparity linkages were noted between multiple subfields such as Neurology & Neurosurgery with Building & Construction; and Electrical & Electronic Engineering with Developmental Biology. The evenness dimension is not assessed quantitatively in the diagrams, but can be visually interpreted by considering how volumes of co-citations are evenly spread out between subfields. That is, are all co-citations concentrated in just a few thick links between a few given subfields as is the case in the control group, or are they more evenly distributed as in the case for SN, meaning that interdisciplinarity is driven by multiple voluminous subfield linkages rather than just a few dominant ones.

A key objective of the SN program is to promote the integration of knowledge, methods and expertise from different disciplines to catalyze scientific discovery and innovation in support of sustainable health and development in the North. This preliminary bibliometric assessment and novel visualization approach effectively captures the exceptional performances of SN research teams in achieving much higher interdisciplinary integration in their papers compared with those from the control set. How this interdisciplinary integration drives research impacts will be the focus of future work.

5. Yegros-Yegros A, Rafols I, D’Este P. Does Interdisciplinary Research Lead to Higher Citation Impact? The Different Effect of Proximal and Distal Interdisciplinarity. PLoS ONE. 2015; 10(8): 1-21.